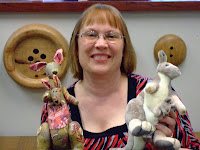 Sew-ists and Quilters love patriotic holidays because they give us a reason to make a new quilt for the season! I am calling this design my Medal of Honor quilt and hope to share it with you.
The two blocks will be paper pieced and anyone interested in the blocks and instructions can email jo@arrowcabinets.com for PDF copies.
The 5 pointed star would be appliqued or fused onto the white rectangle which ever is easiest for you. I personally like using fusible web because it is quick!
There is an interesting story about the 5 Pointed star in American history. According to legend and probably fact, Betsy Ross was approached by George Washington to make the first American flag. George wanted her to sew the stars with 6 points because of the mathematical difficulty of creating an 5 pointed star. Betsy simply folded a piece of paper and with one snip of her scissors, created the star! If you don't believe me, read about Betsy at http://www.ushistory.org/BETSY/flagstar.html and you can even get the directions for your own One Snip 5 Pointed star.
I will be posting more about my quilt as I try to have it done by the 4th of July with pictures to inspire and amuse you! 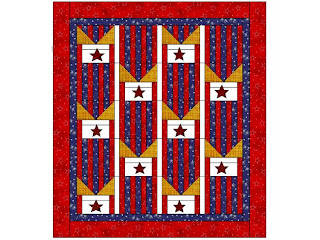 A Cube For Some Cases!

As we write this, winter is once again making it's snowy presence known.  It's hard enough being trapped in the house during these ...